George Monck was born in Devon in 1608 to a family of modest means. By the time of his death in 1670, then General Monck was a national hero, honoured with a state funeral at Westminster Abbey. This pivotal and key man and his stately palace are the backdrop to a unique residential programme at what is preserved of his original ancestral home, Great Potheridge House.

His military career began at the age of sixteen, when he joined the English expedition against Cádiz (1625). His talents as a soldier and skills as a swordsman took him to Europe again, this time fighting for the Dutch during their war of independence against the Spanish.

General Monck served as a Royalist general. Following his capture Monck spent two years in the Tower of London where he met his future wife, Nan. Such was the regard for his leadership and professionalism, Monck was freed to serve as a general for Cromwell.

After the civil wars, Monck served as commander of the navy against the Dutch. Despite his total inexperience of naval warfare at that time, he defeated the Dutch in 1652. In 1653 he became Commander-in-Chief of forces in Scotland.

Following the death of Cromwell in 1658, the nations of Britain were thrown into political turmoil and the looming spectre of another damaging civil war. In 1660 General George Monck marched his well-disciplined regiment from the Scottish borders to London. A new election was called and conditions for Charles II’s return to the throne were issued. General Monck’s wisdom saved us from another bloody civil war. The long term legacy of his actions included removing the military from politics and ensuring trial by jury.

Monck’s regiment was the only New Model Army regiment to be incorporated into Charles II’s standing army, the oldest regiment in the British Army -the Coldstream Guards, who still guard the monarch to this day.

Monck returned to Devon and set about building an H-shaped house over ten years, fit for his new status and wealth. In the 1730s the house was badly damaged by fire. The part of the palace that wasn’t damaged became a three-storey farmhouse, which contains several notable features from the original building such as the staircase, over-mantels (rediscovered in the early 1990s) and the panelled dining room with its impressive fireplace and carved coat of arms. The Great Barn and the front garden also demonstrate some of the former grandeur of the house. The extent of the original palace and much of it’s history remain undiscovered.

After The Great Plague of 1665 and The Great Fire of 1665–1666, George Monck was appointed to govern London. He died in January 1670 and was given a full state funeral, paid for by the king. 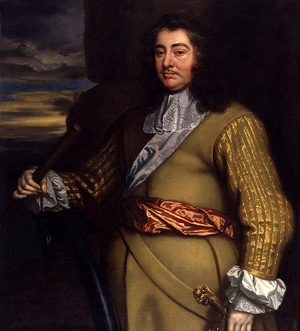 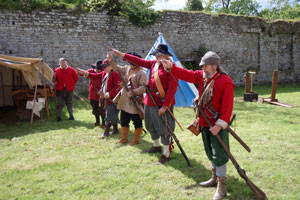